The Black Hole Near the Center of Conservatism, v1.0 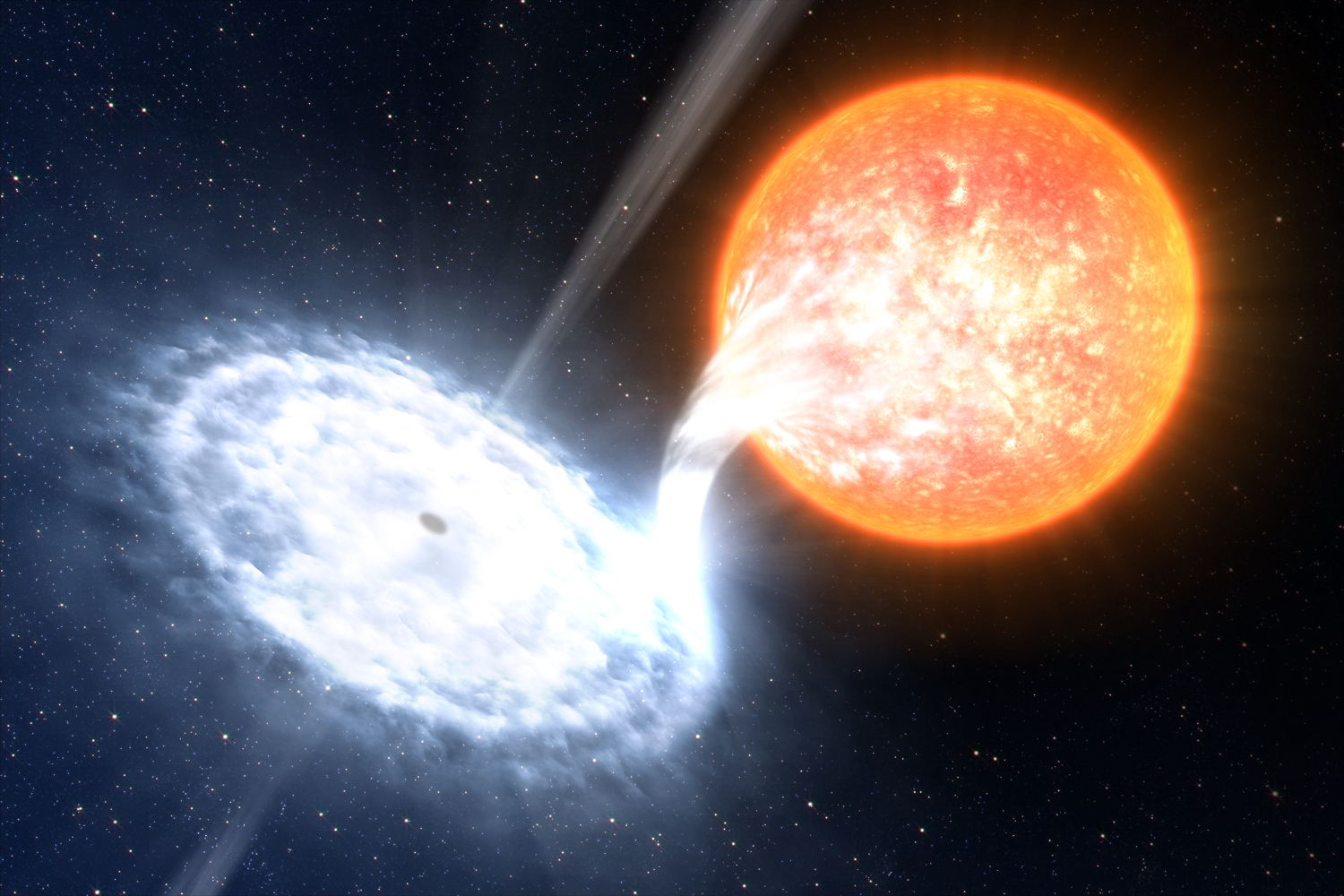 Max Boot is wrong. It's not that Trump has stolen the souls of many conservatives. There is, and always has been, a soul-eating black hole near the center of American conservatism. Oliver Willis is also wrong. The hole is not the whole of conservatism.

The hole is not at the center of conservatism, but it, along with the rest of conservatism, orbits a common center of gravity. The central principle of modern American conservatism is individual responsibility. And the black hole is the addendum: "you get out what you put in".

A big problem with conservative philosophy is that it is "dual-use". A (very) few people believe in it for providing principles of moderation in the scope of government ("moderation" here has no normative content in itself, it simply means "not extreme"). On the other hand, many weaponize it to justify the protection of wealth and all forms of privilege (not a few self-proclaimed conservatives even espouse the incoherent "benefits for me, not for thee" stance). Never-Trumpers don't seem to understand this; they believe their principles are good, and Trump supporters are perverted cultists who deliberately misunderstand them. So when discussing the apostasy of Trump cronies (Rudy Giuliani) and apologists (Lindsey Graham), Never-Trumpers sound much like progressives discussing the (absence of) Christianity of political Evangelicals. Unfortunately, they're wrong. The principles are indeed dual-use, as principles for good government and as weapons in the culture war.

Like any black hole, if you look straight at it, it disappears. You detect it by inferring it's there from the motion around it. Conservatives, whether of the principled kind or of the soulless variety, are angered by nothing so much as the accusation that they, not the poor, the wretched, et al., are shirking their responsibility. Conservatives insist that as productive individuals, often civically active as well, they have fulfilled their responsibility to society. So far, although I strongly disagree, I have no overwhelming rebuttal. But when "conservatives" go on to insist that those who are unproductive (as measured by their incomes) or deemed anti-social (such as drug users) are individually responsible for their social statuses so that society (especially including them!) need bear no responsibility, they have been sucked into the black hole.

Some conservatives continue in their stable orbits, insisting that a society must protect the rights of everyone from encroachment by powerful governments. Progressive arguments sometimes partake of this philosophy. For example, the Black Lives Matter movement argues not only that police brutality and mass incarceration are a perversion of policing, but that an important remedy is just to do less policing. Conservatives point to the importance of the incentives provided by market compensation in modern, extremely successful, market economies on the one hand. Though only a single facet of what society can and should provide to its members, in historical context that success is very impressive. And on the other, conservatives point to a "Law of Unintended Consequences" stating that attempts to protect one interest often cause greater harm to another, a law that progressives are much too reluctant to acknowledge. But far too many conservatives (starting with the entire Republican caucus in Congress) have been sucked into the black hole, from which no light emerges, and which evidently has compressed the brains of Congressional Republicans into a massive singularity of undifferentiated nothingness.

Confusion of income with social contribution

What is the attraction of the black hole? Conservatives frequently cite as evidence for the morality of their position that incomes come from productive activity. As a professional economist trained in the neoclassical tradition, a student of general equilibrium theory and game theory, I know better than most that, under certain standard conditions, in a capitalist market economy a person's labor is rewarded exactly the amount they contribute to the total production. I even insist that, though obviously inaccurate, those "standard conditions" are a useful approximation to the "real world" for some purposes. While we all know people who are overpaid or underpaid, and even that there's systematic discrimination by gender, race, and other personal characteristics unrelated to productivity, I still believe that broadly speaking compensation for work is closely and positively correlated with productivity.

This correlation is philosophically very convenient. Non-conservatives use it themselves in decrying discrimination, and almost everyone acknowledges it as morally just, other things being equal. Most find it offensive that someone who produces more than average (especially through above-average effort) should receive less than those less productive. There are squabbles about providing education so that all can be highly productive, and progressives and most conservatives would make greater or less provision for supporting the injured and sick and even the "merely" poor, and especially their dependents. But only a few resent the high pay of professional athletes. Most feel they deserve it for the effort they put into training and for their talents, which are enjoyed by so many.

Conservatives, however, tend to separate "society" from the household. They focus on economic productivity as the core value of society outside of the household, and equate it with the social worth of the individual (or of the household for those who insist on an asymmetry in the roles of men and women). It is certainly true that everyone can be better off with higher production. Historically, economic growth results in whole countries where the poorest of each later age are significantly better off than the poorest of earlier ones, and each economic class is similarly better off over time. [1]

The use of a person's wealth by itself as an approximate measure of their social contribution is used to justify many conservative policies, especially the opposition to income or wealth redistribution by any means other than market success or failure. [2] This has a strong antisocial effect. The conservative captured by the black hole believes that because your wealth expresses your social contribution, by definition rich people have no further social responsibility. They've already done more than most for others through their economic contribution. Anything more they do (such as charitable contributions or civic participation) is something the rest of us should be grateful for. This simply isn't true.

On the one hand, externalities [3] from both production (coal-fired electric power) and consumption (tobacco) create economic losses to society, which can often be ameliorated. However, when the costs of amelioration become substantial, as in the case of climate change, those captured by the black hole frequently turn to denial of the evidence presented by science, and even to kneecapping science itself, as in the case of research into gun violence. Such denialism is ridiculous and copiously ridiculed, so I will not argue it further.

Social production in the network age

But the astronomical wealth of successful capitalists and even the huge salaries of the executive class require a closer look. Here I want to look at the extension of this principle -- equating social contribution to labor compensation -- to other forms of income, specifically income from the kinds of capital that produce billionaires. (The argument about executive salaries is of the same kind, but more complicated because managers do real work.)

It's not obvious to me that capitalism in the age of Adam Smith (that is, under the "standard conditions") did not have a philosophical justification via compensation = productivity = social contribution, as labor does. Those standard conditions include non-increasing returns to scale, motivating against monopoly. In the absence of government-franchised monopoly, profits will be due either to accumulation of capital through abstention from consumption or to innovations where the benefit of innovation is shared between the innovator and the consumer. [4]

Markets are networks, too

The free traders are right about this: the value created by an economy (note, not "created by a producer") lies not in the objects traded (the mistake of "classical" economists from Adam Smith to Karl Marx), but rather in the relationships of traders to one another. As Smith himself pointed out, this leads to specialization, that is, a situation where the goods produced have little consumption value to the producer. Modern producers produce no inherent value while destroying existing (market) value in the process! The value of the product emerges from the connection of the producer to a consumer. Conservatives extol the market, yet forget this simple fact that is displayed in every supply and demand diagram from Day 1 of Economics 1.

The argument is subtle, and this essay is woefully incomplete in laying it out. Yet I maintain it is correct. Physical productivity is of very small moral value in a modern economy. The value is generated by a social process of exchange, and therefore "society" [6] is morally justified in intervening in the allocation of resources and the distribution of products, via regulation and taxation, respectively. [7] There is no moral imperative to minimize the effect on individuals. Rather, to the extent that individuals participate in society, rights and freedoms must be balanced, and social surpluses may be shared widely rather than reserved to those who happened to be in the right place at the right time (even if they also happened to provide the right idea). [8]

The conservative addendum is wrong because it focuses on individuals. An individual does not "get out what she put in." We as a society get out what we put in, and much more. As a member of society, that individual gets out far more than she put in -- and no moral wrong is done to her if we as members of that society share in the surplus.

"Had I more time, I would have written less." [9] Yet in many cases I fear my expressions are idiosyncratic or demand excessive precision from the reader, so here I provide a few notes to help clarify them (not justify them! I'll do that elsewhere).

Comments not yet implemented, sorry! Feel free to harangue me on Twitter: @yasegumi (en) and @__tanken__ (ja).

This site is running Django now!